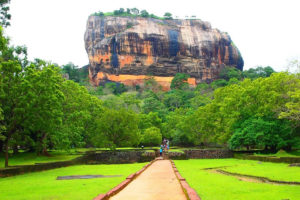 The most significant feature of the Rock would have been the Lion staircase leading to the palace garden on the summit. Based on the ideas described in some of the graffiti, this Lion staircase could be visualized as a gigantic figure towering majestically against the granite cliff, facing north, bright coloured, and awe-inspiring 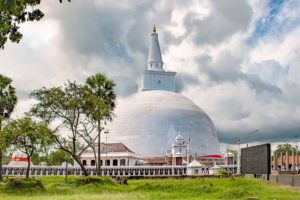 Anuradhapura, is one of the ancient capitals of Sri Lanka, famous for its well-preserved ruins of ancient Lankan civilization. From the 4th century BC, it was the capital of Sri Lanka until the beginning of the 11th century AD. During this period it remained one of the most stable and durable centers of political power and urban life in South Asia. 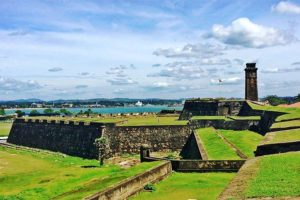 Galle fort was built first by the Portuguese, and then modified by the Dutch during the 17th century. Even today, after 400 years of existence, it looks new and polished with reconstruction work done by Archaeological Department of Sri Lanka.There are many more families who live inside this fort along with Sinhalese, Dutch and English, 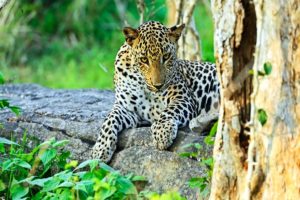 There are many National Sanctuaries you can visit in Sri Lanka. Yala is the largest national park. The National Parks of Sri Lanka are managed by the department of Wildlife and Conservation. The animals to be seen in Sri Lanka’s national parks include elephant, leopard, sloth bear, sambhur and many more. The specialty here is the large numbers of elephants.Sri Lanka’s heritage of wildlife protection runs as far back as 2200 years. 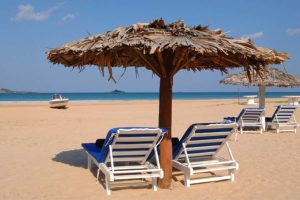 Warm, tropical Sri Lanka is an island with over a thousand with over a thousand miles of beautiful, pale gold beaches, fringed with coconut palms and surrounded by blue water. There are lovely bays, coral reefs inhabited by colorful fish and the sun shines its blessing over all. High season for the beaches of the south and west is November to April, the northern we have beautiful weather and perfect conditions for water sports. 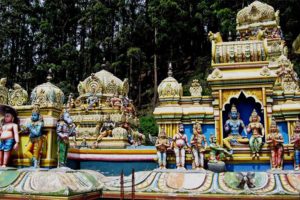 The Ramayana is one of the two great Indian epics, the other being the Mahabharata. The Ramayana tells about life in India around 1000 BCE and offers models in dharma. When Rama was a young boy, he was the perfect son. Later he was an ideal husband to his faithful wife, Sita, and a responsible ruler of Aydohya. “Be as Rama,” young Indians have been taught for 2,000 years; “Be as Sita.Rama is among the most worshiped gods in India. 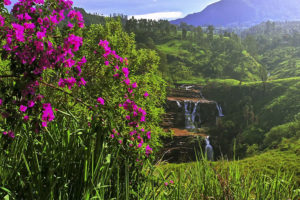 Nuwara Eliya is a mountain station at 1,868 m (6,128 ft) of altitude, in a splendid landscape. Nuwara Eliya was built entirely during the 19th century and its architecture mimics that of an English country town, with red-brick walls, country house like hill club and mock-Tudor half- timbering. 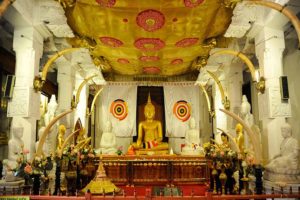 The kings of Kandy, the last independent kingdom of Sri Lanka, knew more than two centuries siege by three European powers to resist invasion. The islanders saw the ruler of Kandy as their King, but political and economic borders were replaced by emotional and religious ties. 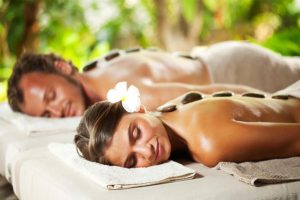 Sri Lanka is an haven for relaxation and rejuvenation. From Ayurvedic spa treatments to modern spa therapy also offers wellness to weary.Revitalize mind and body with an indulging spa treatment at a Sri Lanka spa. moisturize your body with all natural scrubs and wraps designed to cleanse your skin 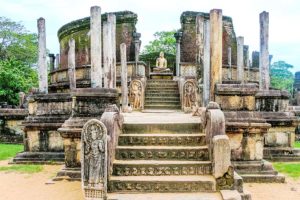 Polonnaruwa replaced the Ancient city of Anuradhapura and had three Kings. Polonnaruwa, the 2nd most ancient kingdom of Sri Lanka is an interesting mix of Buddhist and Hindu structures that are a testament to the different kings who reigned over this ancient kingdom. Polonnaruwa rose to prominence between the 11th and 13th centuries and thrived during the reign of the famous monarch, King Parakramabahu 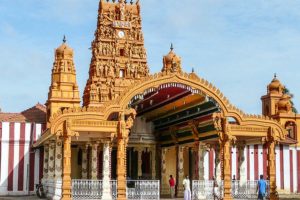 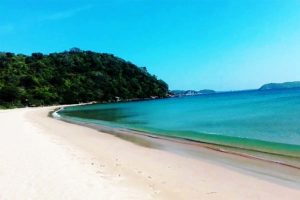 TRINCOMALEE is a port city in Eastern Province, Sri Lanka and lies on the east coast of the island, about 113 miles South of Jaffna. The city is built on a peninsula, which divides the inner and outer harbors. Overlooking the Kottiyr Bay Trincomalee is one of the main centers of Tamil speaking culture on the island. The beaches are used for surfing, scuba diving , fishing and whale watching. The city also has the largest Dutch fort in Sri Lanka 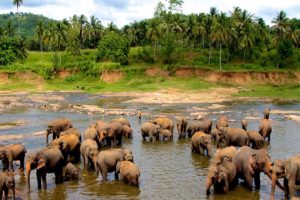 App. 55 miles from Colombo, off the Colombo – Kandy road is Pinnawala, where an orphanage was started in 1975 to house the abandoned and the wounded elephants. The number of elephants has increased to more than 65 now; including Baby Elephants brought from various parts, as well as some of the more than 25 babies born 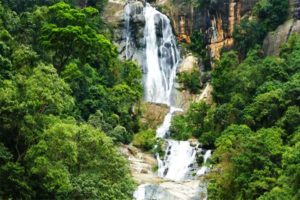 Ella is a small town in the Badulla District of Uva Province, Sri Lanka governed by an Urban Council. It is approximately 200 kilometres east of Colombo and is situated at an elevation of 1,041 metres above sea level. The area has a rich bio-diversity with numerous varieties of flor Ella is a town surrounded by the beautiful greens of tea. 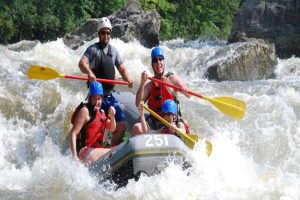 Most of our beaches resorts offer water-sports, ranging from windsurfing, water-sking, surfing, sea fishing, jet scooter racing and white water rafting. The tourist season in Arugam Bay in the Southeast coast starts in March with the favorable windy atmosphere for surfing. Arugam Bay is one of the best surfing areas in Asia. 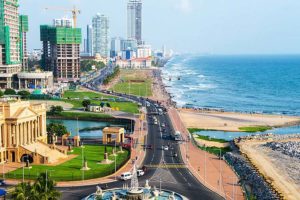 Colombo, is the largest city and commercial capital of Sri Lanka, has a long history as a port on ancient east-west trade routes, ruled successively by the Portuguese, Dutch and British. That heritage is reflected in its its architecture, mixing colonial buildings with high-rises and shopping malls. The imposing Colombo National Museum, dedicated to Sri Lankan history, borders sprawling Viharamahadevi Park and its giant Buddha.The name “Colombo” first introduced by the Portuguese in 1505 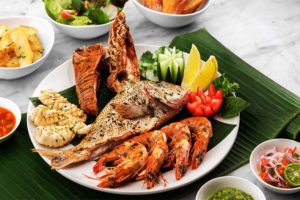 Sri Lankan cuisine draws influence from the colonists and foreign traders. Rice, which is usually consumed daily, can be found at any special occasion, while spicy curries are favorite dishes for dinner and lunch A very popular alcoholic drink is toddy, made from palm tree sap. Arrack is the de-facto distilled national drink. Rice and curry refers to a range of Sri Lankan dishes. The cuisine of Sri Lanka shares similarities with the cuisines of South India.Sri Lanka has a wonderful array of snacks known as short eats 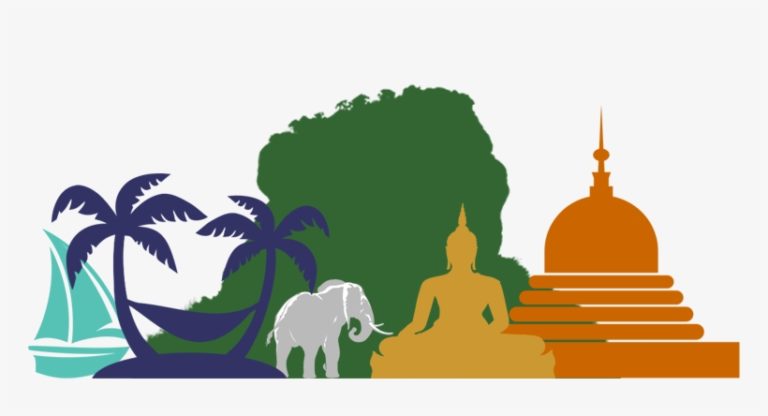 How to Apply for Sri Lankan Visa

Are you thinking of visiting the beautiful island but having trouble with the visa process to continue with your journey? let us help you apply for visa and make your visit a memorable one without any hassle.

✻
Got plans to travel the world? Stop worrying and let us help you turn your travel dreams into reality. Orinway Leisure provides the best service to our clients and stop at nothing to give them a memorable adventure. 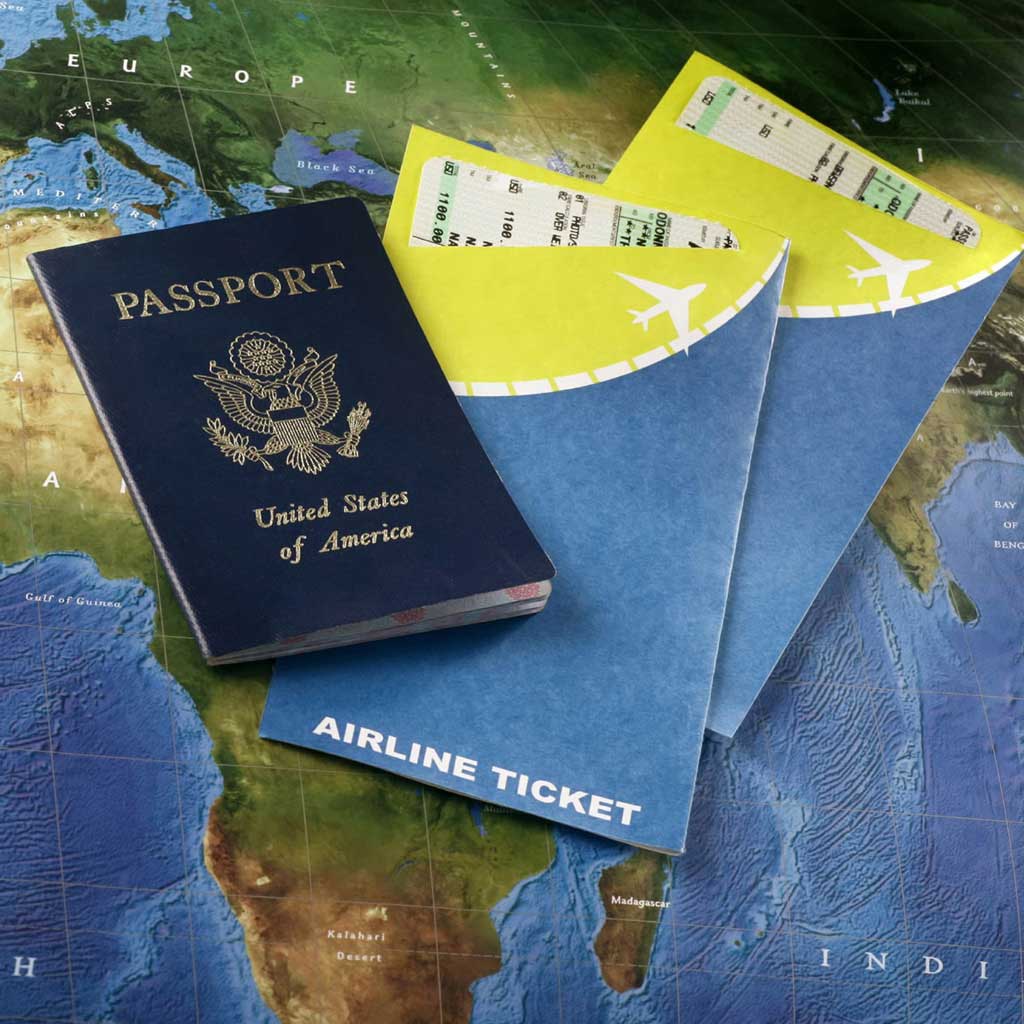 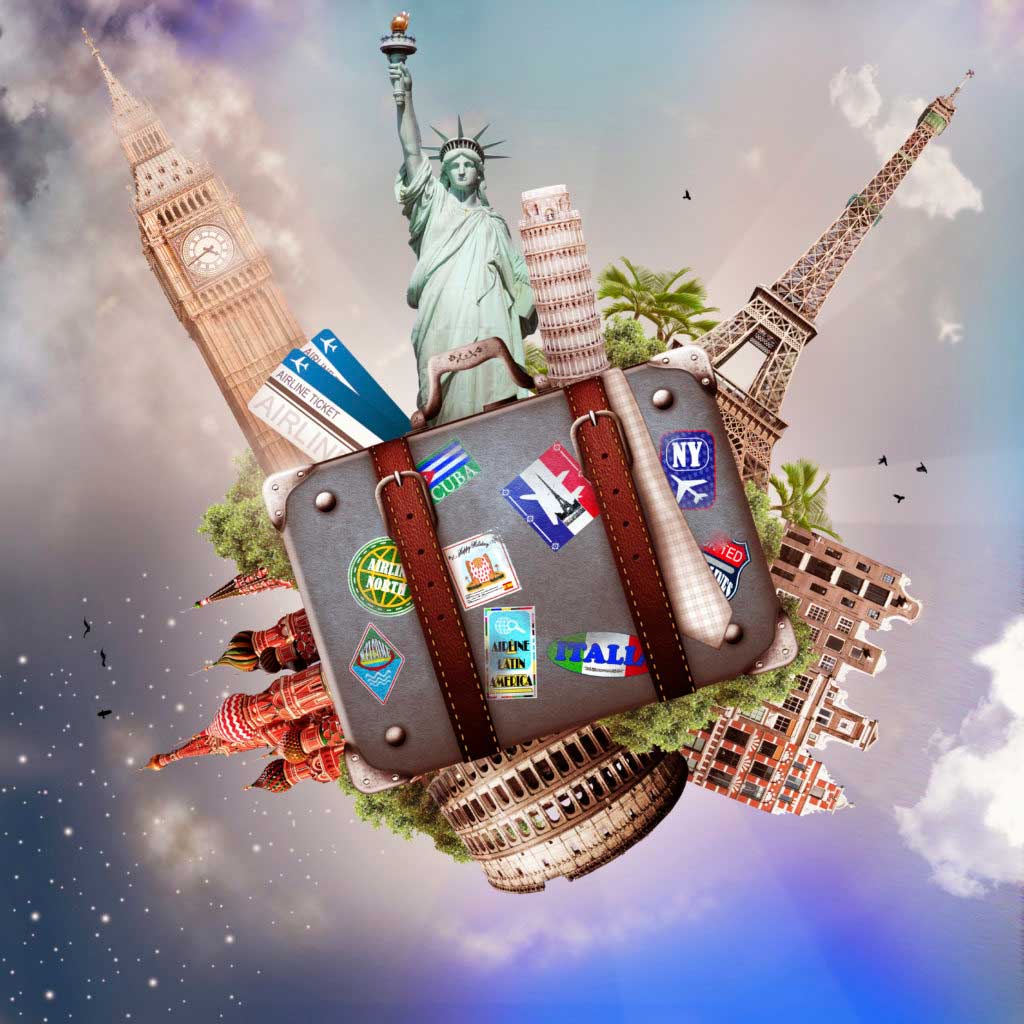 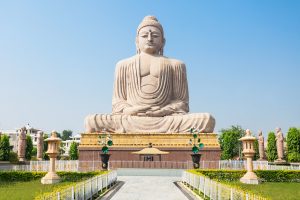 Tour the country where Buddhism was born. Spend 12-14 days visiting the most magnificent places in India such as Varanasi near the Varuna rivers in Uttar Pradesh, Bodhgaya – where Lord Buddha got enlightenment under a Peepal Tree, Nepal – located mainly in the Himalayas is where Queen Mahamayadevi gave birth to Siddhartha Gautama. There are many other sacred sites that you could visit during the tour groups. 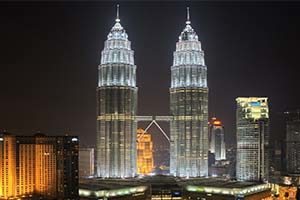 A country with many sites where you can visit and have a exciting vacations.We assure you, the kids especially would have the most memorable time of their life and will most definitely beg for a second visit to Sunway Lagoon.
Cover up almost the entire KL city tourist sites within a couple of hours. Petronas Twin Towers, King’s Palace, Independence Square,KL Gallery, National Mosque, Kuala Lumpur Tower Visit, Kuala Lumpur Railway Station and more. 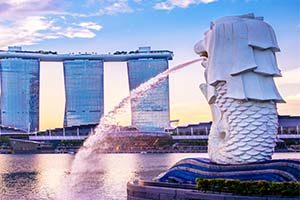 Visit the beautiful lion city and have an extraordinary time. tour the city and don’t forget to visit Universal Studios Singapore, a theme park located within Resorts World Sentosa on Sentosa Island, Singapore.Gardens by the Bay is a nature park of reclaimed land along side to the Marina Reservoir.The park consists of three waterfront gardens: Bay South Garden, Bay East Garden and Bay Central Garden. 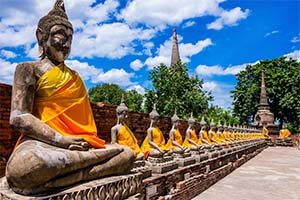 Known for tropical beaches and sponteneuos night life. Thailand is a great spot for you to go out of the way and have thetime of your life.
Ladies, is this the ideal destination to do your shopping in bulk. visit the capital’s most beautiful Temples of the Golden and Emerald Buddha’s, Grand Palace, and flower market.Don’t forget to explore Phi Phi Islands are an island group in Thailand. Safari World is a site tourist dont miss to visit 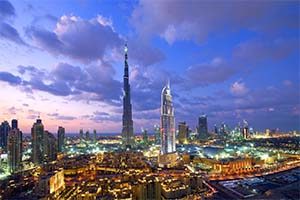 The city known for its creative architecture, ending shopping and lively nightlife. Dubai has many incredible building structures for our exploration. Take a step and adventure the amazing artificial island, The Palm, a resort with many restaurants, shopping spots, parks and many other choices for your convenience. 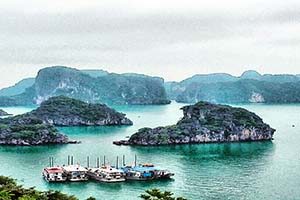 Offering a range of beaches, rivers and Buddhist sites. The capital of Vietnam, Hanoi is well known for it ancient architecture and growth in many cultures such as Southeast Asian, Chinese and French. the heart of the city has many little temple sites that many tourists admire immensely.
Ha Long Bay has the most eye catching spots that are ideal for diving, hiking, rock climbing and many other activities.

We aim to please you by providing the best services possible. Here’s a little sneak peak of the adventures our valued customers experienced with us.

Having served many clients, we understand what your requirements are and work tirelessly to reach your travel goals. Your happy memorable trip is all that we wish for you to have hence we search far and wide to provide the best rates we possibly can.

Our customers reviews have been very helpful for us to improve the services we provide on a daily basis.